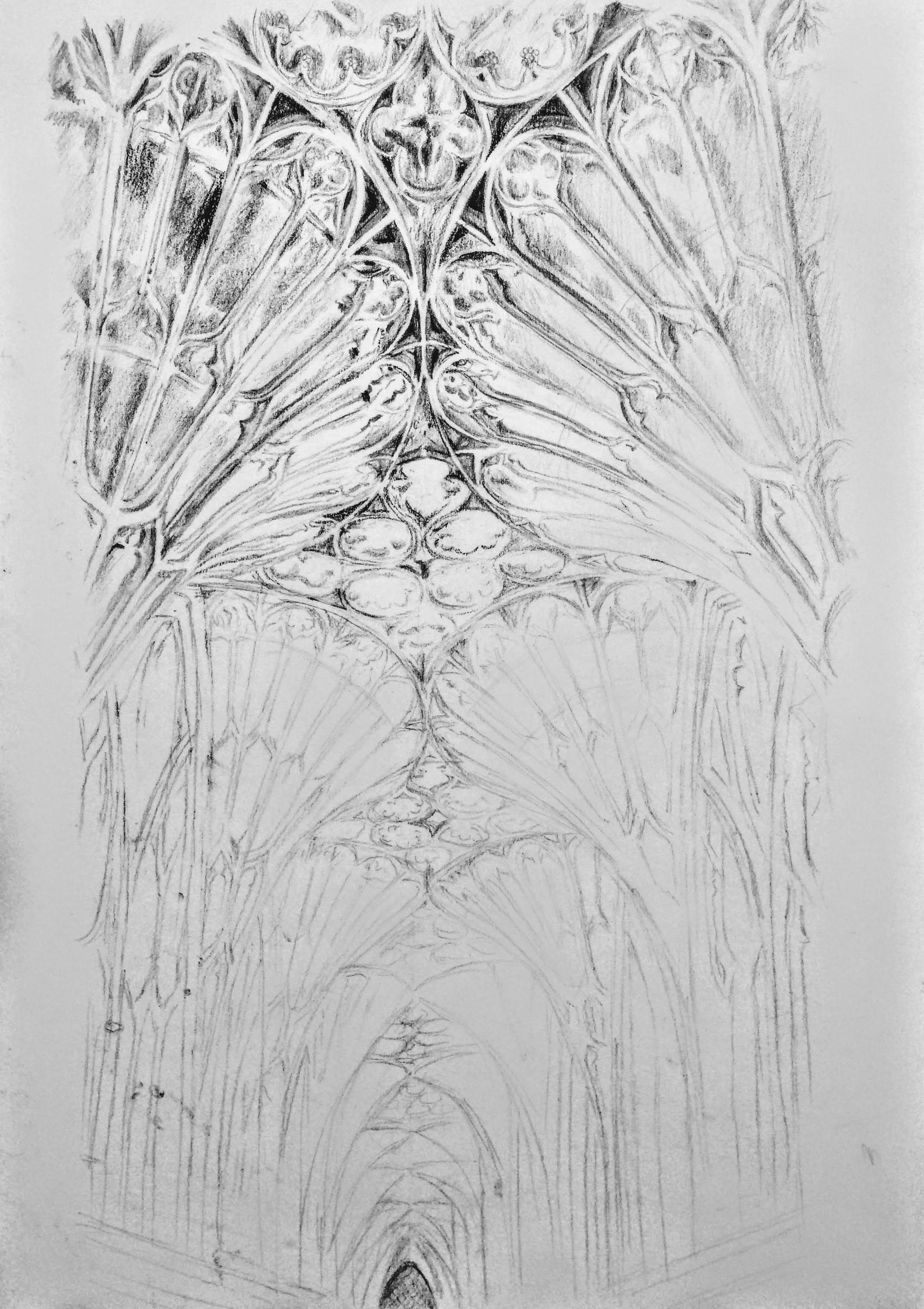 ‘God is in the details.’ Ludwig Mies Van Der Rohe

As the daughter of an architect and interior designer, attention to detail has been a bit of an obsession of mine throughout my life. I’m drawn intuitively to the forms of nature, buildings, textures; design is all pervasive in the natural and manmade world around us and is a constant source of inspiration to those who are receptive and observant. I love to capture interesting details that I find on my travels in pencil on paper, translating them onto canvas at a later date.

I recently visited Gloucester Cathedral and explored its famous hidden cloisters, marvelling at almost 1000 years of history and faith, alongside its magnificent medieval fan vaulting and intricate details. Architecture at its best becomes more than function, its form and design is so fluid it becomes an organic structure, imitating nature itself. The cloisters at Gloucester Cathedral are believed to be the earliest example of fan vaulting in England. Aside from Baroque architecture, the Gothic form of architecture is one of my favourite styles. The elaborate fan vault is just one of its many interesting features; it is one of the last and most extravagant forms of medieval vaulting and is strongly asociated with England. They are so named because the vaulting ribs resemble an open fan, with ribs of equal length radiating out from a single point supported by a vaulting shaft or capital. Other well known examples are in King’s College Chapel in Cambridge, the have of Sherborne Abbey in Dorset and the choir of Peterborough Abbey in Cambridgeshire. Begun in the late 14th century and finished before 1412 by Abbot Froucester, the cloisters replaced an earlier Norman cloister. It was originally built to house the monks and provided a space for them to live, work and meditate. All domestic buildings would originally have branched off three of the cloister walks, according to the traditional Benedictine design. A row of twenty carrels (niche spaces) would have housed desks for the monks study. Gloucester Cathedral has attracted visitors from all backgrounds and faiths and has gained the interest of various filmmakers, with the cloisters featuring in three Harry Potter films.

I will be producing more architectural and interior design drawings and studies, many of which will serve as preludes to paintings. I hope you enjoy their details as much as I do!