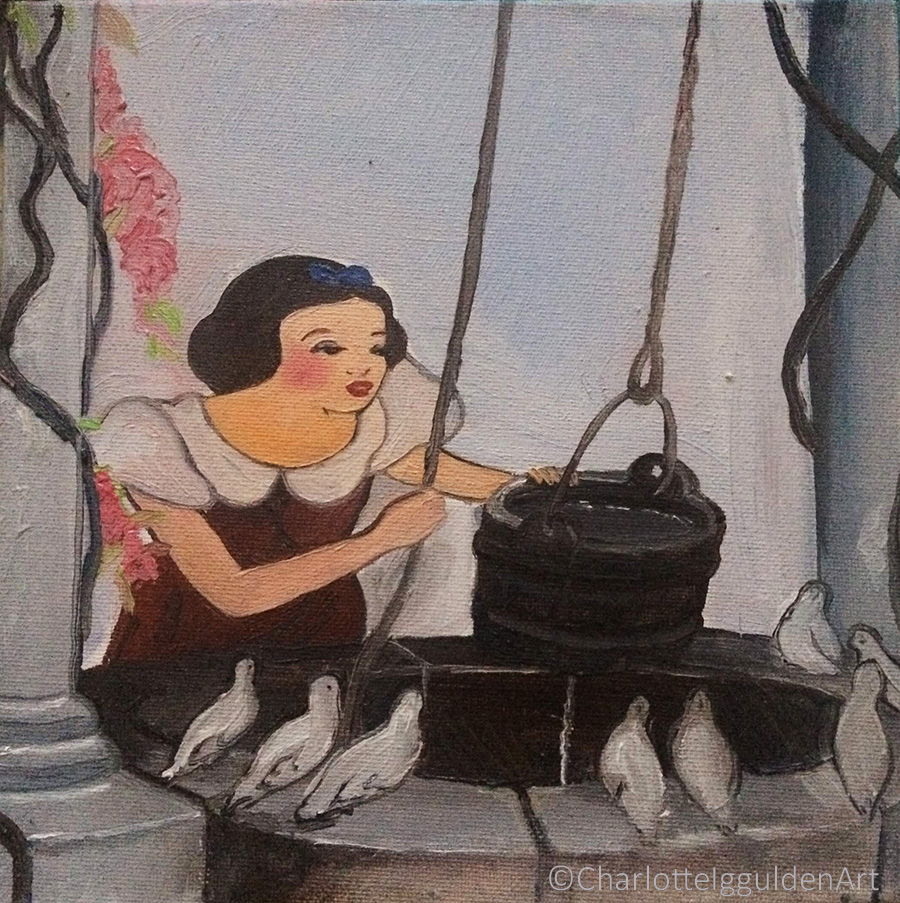 All artists, in their essence, seek to communicate the spirit or soul of a person or thing, whether that be via paintings, illustrations or animation.

Like many other ‘millennials’, I love Disney films. I love the stories, the fairy tale, the moral, the laughter and the art. The scenes are like works of art, every part of a scene meticulously painted to create a new world for people of all ages to enjoy and admire the craftsmanship involved. The whole film becomes a gorgeous painting to become immersed in. 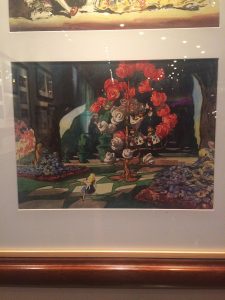 Coming from a family of creative people, I have been exposed to art since an early age, whether in books, museums, galleries or film. I love to admire it in painting, sculpture, design, architecture or the best source – nature itself. 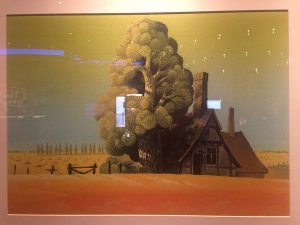 I have already visited the original Universal Studios and Disneyland in Anaheim, California, so when I was surprised at my birthday with a trip to Disneyland Paris I was excited to say the least. This was a dream come true!

Some people, who perhaps grow up too fast, may see Disney films as being childish. I see the films as being symbolic. Many of their animations are based on folk tales or fairy tales: Disney’s Sleeping Beauty and Snow White, amongst others, are based on variations of original fairy tales by Brothers Grimm and Charles Perrault, both of which involve a beautiful princess, a sleeping enchantment and a handsome prince. Many fairy tales are dark stories, almost parables, of good overcoming evil and courage in the face of insurmountable odds.

Fairy tales are intended to be symbolic and if we are open to them, to teach us a moral or lesson. They should teach people of all ages about the dangers of jealousy, deceit, cruelty, greed, corruption and other evils that plague the world we live in. The power of love to save and redeem features heavily in Disney’s films and versions of fairy tales. Without love there is no hope – whether it is the kiss of true love that saves Sleeping Beauty or Snow White, or between sisters Elsa and Anna in Frozen.

Illustrations of Princess Aurora and Prince Philip from The Sleeping Beauty fairy tale inside the castle tower at Disneyland Paris: 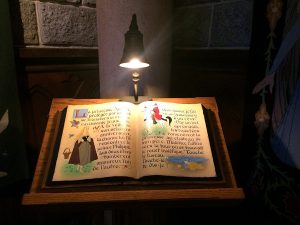 It can be argued that what Walt Disney attempted to do was to create a work of art, not simply cartoons. He sought to create characters that could somehow, despite being painted two dimensional figures, elicit both joy and tears of sadness – the first Disney film I watched at the cinema when I was little was Bambi and I still remember crying and holding onto my mother for comfort. I honestly believe that many would find it difficult not to cry whilst watching Bambi, no matter their age. The power of art to harness human emotion and create catharsis is a powerful tool indeed. I admire Walt Disney for his desire to restore a childlike innocence to people of all ages anywhere in the world through his medium of film and in his parks. Animation, like other works of art, should reflect our world and be recognisable in some way, perhaps even encourage us in our relationships or circumstances. They can help children dream, hope, play and imagine. 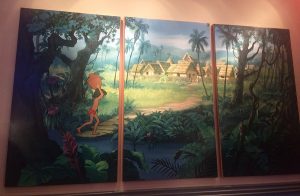 Children are always receptive to new things and their curiousity helps them to learn. Play and imagination is proven to be vital to growth and development, their understanding of the world around them and their place in it. A film might not change the world entirely, but it certainly has the power to inspire people.

Half painted scene from Pinnochio: 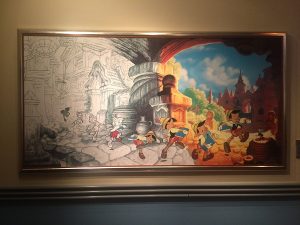 As a Christian, I see art as a powerful tool to bring hope, love and joy to the world. God is the best creator after all and imagination is a gift, to be utilised for good and not evil. Prince Philippe even seems to put on the full armour of God to fight evil in the Sleeping Beauty film – armed by the fairy godmothers with his supernatural sword of truth, and a shield of virtue which resembles a shield of faith in Ephesians.

A few Disney villains in view: 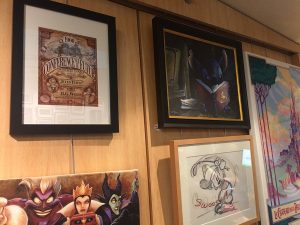 At Walt Disney Studios in Paris, I visited Art of Disney Animation and listened to a talk on the making of a character and the vision behind their design. Every aspect of a character in a Disney film is symbolic and meaningful, just as a costume is to a film or colour is to a painting. No character’s look or personality is accidental – every aspect, from their anatomy to their movement or expression is to convey a message. So many changes might be made to a character’s design to ensure their believability and importance to a scene and the film overall. Every aspect conveys their narrative and story to make them more believable or relatable.

Paintings from Beauty and The Beast: 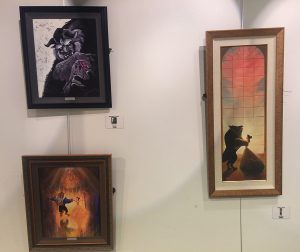 Model of the Beast in the studios: 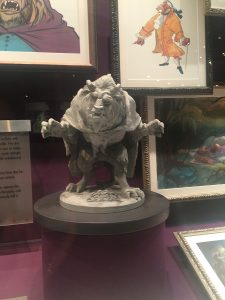 The presenter at the Studios used Mulan’s companion, an anthropomorphic red dragon called Mushu as an example of character development. Mulan might be based on a historical figure in Chinese legend, but she did need a sidekick, or rather guardian and guide, to protect her and for comic effect! 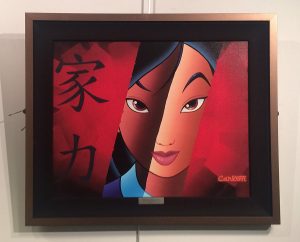 The audience listened attentively to the presenter speaking initially with screenplay writer Chris Sanders, then with Mushu’s supervising animator, Tom Bancroft (his brother, Tony, was the director for Mulan!). The little dragon (not lizard..) even made his own delightful appearance during the talk, interacting directly with the presenter and animators.

In this animation masterclass, Tom explained how Mushu’s character developed as a result of his Eastern (Chinese) heritage. Initially there were to be two reptilian creatures but this was changed to one as they could not take attention from Mulan as the titular character; Mushu then went from having two heads to one and was made smaller in stature. He resembles depictions of Eastern dragons in Chinese art during that time, is benevolent and can breathe fire. I also recently discovered that Mulan’s early story was concurrent with a Scottish tale project that featured a dragon character and when it was cancelled, Mulan inherited the dragon as a sidekick. You can read more of Mushu’s development here.

I couldn’t find an illustration of Mushu so here he is in toy form in the animation studios shop: 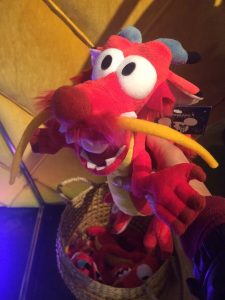 Interestingly, I found out that Pocahontas’ sidekick was originally a turkey before they decided a racoon would be more effective alongside her!

The paintings that fill every scene in a Disney film is intended to draw the viewer into that world, creating possibility out of a sheet of paper. It is an illusion that speaks truths and desire, not merely escapist fantasy.

Paintings from Aladdin, Tangled and The Little Mermaid: 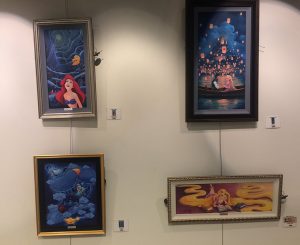 This is my version of a lovely scene from Snow White as she begins to sing with the doves at the wishing well. I was able to paint it whilst working on private commissions, so it isn’t yet finished but will be soon! Did you know that Snow White and The Seven Dwarfs consists of over 1, 500,000 individual pen-and-ink drawings and watercolour paintings? I painted this scene in oils on canvas instead of watercolour and ink to give my personal touch; I also painted just Snow White and the flowers in colour: 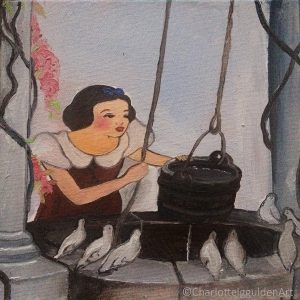 I love this beautiful painting of Florian serenading Snow White, which I found whilst exploring the Disney Village: 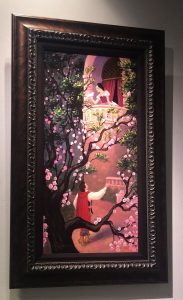 Here is another of my favourite Disney couples, Roger and Jessica Rabbit, from ‘Who Framed Roger Rabbit,’ filmed in collaboration with Steven Spielberg: 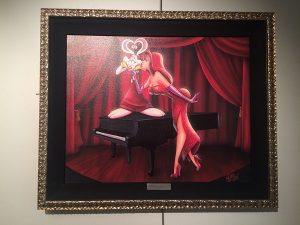 And let’s not forget that Walt Disney’s dreams of inspiring people of all ages with his animations began with a mouse named Mickey! 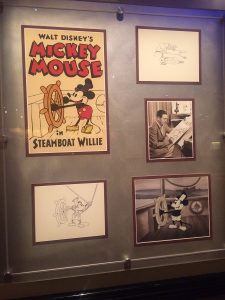 I am currently working on commissioned oil paintings and ones for exhibition later this year (in my normal style rather than illustrations/animations!), but as they are private I am looking forward to dedicating more blog posts to art extraordinaire Walt Disney and his team. I hope you enjoy the art of Disney as much as I do!