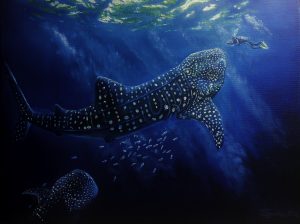 I painted this close encounter of a scuba diver swimming with whale sharks (Rhincodon Typus) in the Philippines as part of a series of commissioned oil paintings in 2016.*
I included a scuba diver to highlight the incredible size of the whale shark compared to a human, as well as its majestic presence. I wanted to suggest their meeting as a wondrous yet intimate moment in time between humanity and nature.
*See more in the section ‘Whale sharks and biodiversity in the Philippines.’

Adult whale sharks are often found at the surface, making them popular with snorkelers and divers. Despite their friendliness, these creatures remain enigmatic to scientists and conservationists; their maximum size, lifespan, and age of sexual maturity unconfirmed. Researchers are also unsure why they have spots.*
*See more on these topics in the following sections.

Whale sharks (Rhincodon Typus) are the largest known extant fish species in the world. They are not whales, but their size is comparable. They dwarf great white sharks in size; the average size of a whale shark is around 32 feet, whereas great whites grow to around 20 feet. However, whale sharks are believed to grow over 40 feet (20 metres), similar to that of a bus. They can also weigh up to 20 tonnes. Whale sharks do not have any natural predators.

Most sharks prefer temperate climates, except for Greenland sharks, which live in the Arctic and Northern Atlantic. Some whale sharks have been found in colder North Atlantic water near New York, but most are found in warm, tropical waters such as the Indian and Pacific Oceans.

According to this National Geographic video, titled ‘Investigating the Mysterious Whale Sharks of Mafia Island,’ whale sharks help support small ecosystems, as they are often found with schools of smaller fish alongside them, presumably hoping to catch small morsels or plankton when the shark feeds.

My painting shows a school of smaller fish following one of the whale sharks: 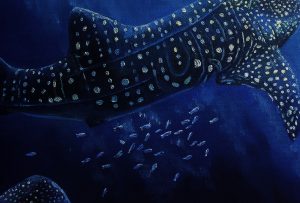 Interestingly, this phenomenon has inspired local fishermen living on Mafia Island, Tanzania, to work alongside whale sharks to catch the fish without harming the sharks.

Although often found at the surface, whale sharks can dive further than 1000 metres. In one study, based in the Saudi Arabian Red Sea, researchers used three types of satellite-transmitting tags to track the movements of 47 whale sharks.

Their findings were impressive:

Whale sharks are the only species of the genus Rhincodon, part of the family Rhincodontidae. They are classified within the order Orectolobiformes, which contains seven families of sharks and includes the carpet sharks. Carpet sharks are given the name due to their mottled body patterns, evocative of carpet-like designs.
Whale sharks are easy to identify due to their size and distinctive pattern of white spots and stripes. The patterns are believed to be as unique to each individual as a fingerprint is to a human. However, the purpose of their spots is a mystery. Typically, patterns occur to aid camouflage; wobbegongs (a common name given to the 12 species of carpet sharks within the family, Orectolobidae), use the spots on their bodies as camouflage as they rest on the seafloor, and to help them blend in with the reef.
Intriguingly, it has been suggested that the spots on whale sharks help protect the sharks from harmful ultraviolet rays.

Most sharks are carnivores, but some, like the whale shark, are filter-feeders. Inside the whale shark’s mouth are several hundred rows of small, hook-shaped teeth. Although it has a mouthful of teeth, the shark doesn’t use them to bite or chew food.
The whale shark is one of three species of filter-feeding sharks, namely the basking shark, and the more mysterious but aptly named megamouth shark. The whale shark actively swims through plankton, sieving these organisms through its gills; it has been observed ram filter-feeding and at times, nocturnally. Whale sharks are migratory animals who appear to move to areas in conjunction with fish and coral spawning.
Sharks within the order Orectolobiformes have eyes set far back behind a small mouth. Unlike most sharks, where the mouth is underneath the snout, the whale shark’s mouth is nearly at the tip of its nose.

The whale shark is usually solitary, however, it is sometimes found in schools of up to hundreds of individuals. These animals are found mainly in the open sea, but they sometimes come near the shore. Their age of sexual maturity and reproductive biology is unconfirmed, however, scientists presume that whale sharks are ovoviviparous, where the females incubate fertilized eggs inside her before they hatch,  giving birth to fully formed live young. You can read more about ovoviviparity, and how it differs to viviparity, here. Each litter contains about 16 young, but litters of many more are possible. In the mid-1990s a female whose uterus contained nearly 300 young was caught near Taiwan. Like the other mysteries surrounding whale sharks, they have never been observed giving birth, and it is not known where this may happen.

It is thought that whale sharks are born between 40-60cm, but there are few sightings of individuals below 3m, and no one has yet determined where they go before reaching this size. However, one whale shark measuring just 38cm was found in the Philippines in 2009, suggesting it was a birthing ground and not simply used for feeding.

The gigantic size of whale sharks suggests they can live up to 100 years.

Whale Sharks, biodiversity, and conservation in the Philippines

As mentioned, the commissioned painting featured in this blog is part of an ongoing series of paintings of the Philippines.

Aside from its abundant natural mineral resources including gold and nickel (the country has the second largest gold deposit in the world), the Philippines is a biodiversity hotspot and a popular place for whale sharks to congregate; it is an archipelago consisting of more than 7,000 islands and is the smallest of the 17 megadiverse countries in the world. The Philippines covers only 2/100 of the total land area of the earth, yet 20,000 species of plants and animals have been recorded here, half of which are found nowhere else in the world. Read more on its biodiversity here.

15 years ago, WWF Philippines partnered with Donsol and other tourism stakeholders to develop the Community-based Whale Shark Ecotourism Program and establish guidelines for whale shark interactions. Scientists are responsible for researching and studying individual sharks in an attempt to conserve them.

There are over 440 species of sharks in the world. These awesome creatures have outlived the dinosaurs, but many are now sadly threatened with extinction.

Due to threats to their ecosystem, whale sharks have been listed by the International Union for Conservation of Nature as endangered since 2016. Like all sharks and large fish, whale sharks are vulnerable to bycatch (becoming caught in fishing nets).
It is estimated that 100 million sharks and rays each year are killed by humans. If not victims of bycatch, most are killed by commercial fishermen for their fins and flesh. They are also sometimes illegally hunted and eaten as a delicacy in certain parts of Asia.
Sadly, sharks are greatly misunderstood. For instance, the orca whale is the ocean’s top apex predator, not the great white shark. On average, one person dies each year in the US from a shark attack. Cows, bees, wasps, dogs, and snakes are responsible for far more deaths each year in the US than sharks.

Indeed, whale sharks have no natural predators apart from people.

We need to remember that the ocean is their territory, not ours. Predatory species such as the great white, bull shark, or tiger shark, only attack if they confuse a person for their prey, usually fish or seals. It is best to bear this in mind if we choose to swim in areas of the ocean where they are present.

All sharks are vital to a healthy ecosystem

All marine life is essential to a healthy ecosystem and that of the planet as a whole. Sharks are vital as they maintain the species below them and are indicators of ocean health. The apex predators feed on weak and sick animals and ensure biodiversity.

Coral reef ecosystems, seagrass beds, and commercial fisheries have all declined due to the loss of sharks. Without sharks, larger predatory fish, such as groupers, increase in abundance in the coral reefs and feed on the herbivores. As the herbivores decrease, macroalgae increase and expand, leading to the loss of coral and the detriment of the entire reef system.

Majestic and awe-inspiring, yet vulnerable

I recently completed a four-week online course with the University of Southampton on ‘Exploring Our Ocean.’ One of the tasks was to upload an image, title, and description, to represent what the ocean meant to me; I uploaded my painting of whale sharks and titled it, ‘Majestic and Awe-Inspiring, yet Vulnerable.’ The wonders of nature surround us. For it to continue to inspire us, we should try to protect it from threats and exploitation.

With Shark Week upon us (9-16 August 2020), I thought it apt to share my painting of whale sharks. Created by the Discovery Channel to raise shark awareness, the event has grown online, with over one million hashtags on Instagram alone.
The Natural History Museum and the American Museum of Natural History have a ‘Nature Drawing Club’ and have included ‘Shark Week,’ so I have tagged them in the image on Instagram to help raise awareness of the vulnerability of whale sharks and the need to protect them.